If you’re starting out with tarot, you may feel like many before you have: how in The World am I gonna memorize all these cards?

As with all tasks, it’s easier when you…

In this article I hope to show you a peek into the system of the tarot. I also want to help you connect with the story of The Fool, tarot’s main character and around which all the cards is based.

Reading the tarot is best when you have fun with it and put a piece of yourself into it. Put another way, the tarot is not just about abstract concepts—it’s about you! After all, that’s why you’re interested in the cards, right? So place yourself in the place of The Fool when I mention them and imagine how you would feel and act in their place.

About The Major Arcana.

The tarot is divided into two parts: the major arcana (or “trump cards”) and minor arcana.

The major arcana is easy to differentiate because the cards, 0–22, usually have a character. These are sometimes called the trump cards because the carry more weight than the minor arcana.

These are the cards we will focus on today.

The tarot is sometimes known as “The Fool’s Journey.” Represented by the number 0, The Fool is all of us. They are excited to go on a journey, sometimes so excited they don’t watch their step. The major arcana is The Fool’s divine journey. (As opposed to day-to-day life, which is what the minor arcana represents.)

Let’s start at the beginning.

The Fool is excited to go on their journey, not aware of the risks & downfalls coming to them.

The Magician is The Fool’s teacher and sparks their inquisitive nature.

The High Priestess is another teacher who implores The Fool to use their intuition before jumping into situations.

The Empress is The Fool’s mother figure and creator.

The Emperor is The Fool’s Father figure, showing the importance of authority and discipline. 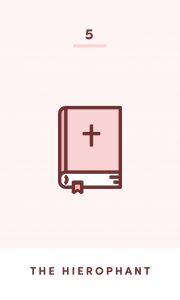 The Hierophant demonstrates to The Fool the importance of tradition.

The Lovers represent a crossroads The Fool encounters between their current path and a new love.

The Chariot teaches The Fool about making up their mind, keeping the course, and making victory non-optional.

Strength is a strong figure who demonstrates to The Fool the power of quiet confidence.

The Hermit encourages The Fool to seclude himself and think introspectively of all these lessons.

The Wheel of Fortune is when The Fool realizes life is made of cycles! Nothing is ever the end.

Justice teaches The Fool how to be rational and fair. 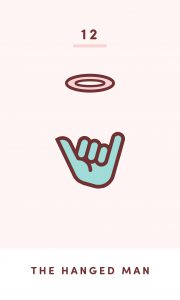 The Hanged Man is when The Fool decides to turn upside down and inspect life from a different perspective. He is changed by this experience.

Death clears out the old and brings in the new, originally to the dismay of The Fool, but then he sees the inherent value in Death.

Temperance shows The Fool how to put opposites together to create a third, powerful, balanced force.

The Devil is a dark figure who brings to light the addictions The Fool has been subjecting himself to.

The Tower is the collapse of everything The Fool previously thought. Despair but chance to start anew.

The Star represents the quiet healing period of The Fool.

The Moon shows The Fool that most of their troubles are illusions fabricated in the mind.

The Sun is a new bright beginning.

Judgement is when The Fool learns self-forgiveness and how to move on.

You’ll see that the struggles of The Fool get more enlightened as they go on yet experience peaks and valleys—just like yours. Not only that, the cards tell a story we all know—the hero’s journey. It’s a story with deep history in the human psyche, and we all see ourselves as the heroes of our own stories. There’s little reason to be intimidated by the tarot… it’s just you!

Tarot is a rich tapestry of interwoven themes. From numerology to elements, suits to modalities, there’s no end to studying the tarot because there is always deeper meaning when you take a look. Today I’d …

When I first started reading tarot, I couldn’t get enough of practicing memorizing the cards. It felt like it was the most important first milestone I could achieve. Even if I had to reference a …